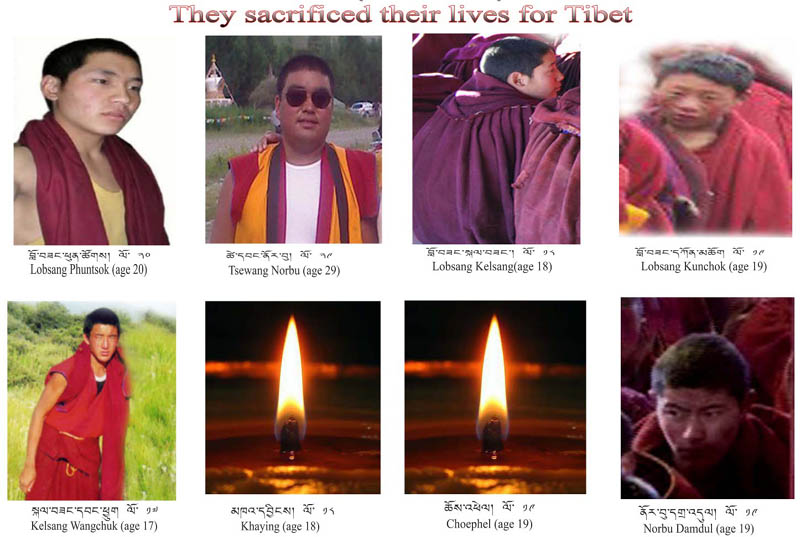 London: A wave of protest has fanned across the Tibetan region recently: the self-immolation of Buddhist Monks. Five Tibetan teenagers have self-immolated in just one week, and a further three self-immolated and died since March of this year. The cases of protest are occurring in Tibetan ethnic regions of China's Sichuan province, largely around Kirti Monastery of Eastern Tibet, which has witnessed a large security crackdown by Chinese forces since the immolations began in March, and a forced exodus and ‘patriotic re-education programme' of around three-hundred Tibetan monks.

The protesters, all reportedly monks or ex-monks, are calling out in the most powerful manner they can without harming others, highlighting the growing discontent and need to address the situation in Tibet, for an international intervention for basic human and religious freedoms, and for Tibetan freedom.

Through the act of burning themselves to death, by going against the very wishes of their spiritual leader the Dalai Lama- and by performing violence against themselves, the monks sin against Buddhism itself - what is the symbolism of their desperate actions. And why immolation?

The notion of a devout Buddhist monk considering taking a life is inconceivable to many, and Tibetan Buddhists particularly are renowned for their pacifist, mild manner. This is a view that aligns with their spiritual leader - the Dalai Lama. Yet with mounting suppression of cultural and religious identity, Tibetans remain vigilantly unwilling to hurt the very people that harm them, a stance that, in other situations, remains alarmingly rare in the 21st century.
The act of immolation does not intend to hurt anyone but the perpetrator. It is both solemn and macabre.

The young monks who take their lives, all of whom are aged below 30, have turned to themselves as a means of expressing their anguish, to their own bodies as a tablet on which to write their message to the world.

The symbolism of the body being destroyed in such a public, excruciating manner, highlights the need for a voice among the voiceless, an identity among the masses. It ties in symbolically with the Buddhist belief, that one should be the selfless, and the impermanent nature of one's body. It reflects the deep seated belief of the revered Bodhisattva Medicine King, who repeatedly set his body ablaze for twelve hundred years, in an effort to spread the light of Dharma, according to the Lotus Sutra.

Reports from the region highlight that the monks, who self-immolate both alone and in pairs, have often shout slogans of ‘Free Tibet', and commonly hold images of the exiled spiritual leader of Tibet, the Dalai Lama.

Death by fire is surely an agonising, violent and drawn out method of taking one's own life in the hope that it improves the situation for their countrymen. It is conducted in public, under the gaze of onlookers, and it is a slow lengthy process. It does not guarantee death at all, it only assures pain.

The fact that the monks burn themselves to death is a pattern that has emerged in Tibet that was carried over from Southeast Asian protests, similarly by Buddhist monks. It also occurred occasionally during the Arab spring, and is more common across India's history. Burning to death is simultaneously violent and passive, deafening and silent. In a sense it is culturally resonant of cremation, a baptism of fire as the protesters step into the next life, yet among Buddhists, a markedly spiritual taboo.

If the hugely revered, exiled spiritual leader of Tibet, the Dalai Lama, is unable to quell the reign of fire that is sweeping across the region, then what hope do his successors in exile have? Recently appointed Prime Minister in exile Kalon Tripa Lobsang Sangay must be feeling the pressure, since becoming the sole political leader of Tibetans in exile during the bloodiest year for Tibetans in Tibet since the 2008 uprisings.

The knee-jerk reaction from Chinese authorities, and of police who attend to the self-immolations, is immediately to extinguish the flames and remove the protesters from the public gaze as soon as possible. A sense of embarrassment is arising from China that harmony has not occurred between them and the Tibetans. After decades of suppression and attempted integration Tibetans are still highlighting the desperate need for independence and respect.

The most recent immolations have not even made it onto Chinese news agency websites, and when they do, they often conflict with reports coming directly from Tibet.Reports that emerge highlight that many of the monks do not die immediately; for those who do it is often days later in the custody of the authorities. They are jarred out of their agonising final act, and their message smothered by the very people they wish to be rid of.

Meanwhile, the Tibetan community in exile mark the sacrifice of the monks with a mixture of horror and admiration, as incident after incident surfaces from Tibet. Dharamshala, the North Indian community of Tibetans in-exile, hosts prayer vigils and peaceful demonstrations every time a monk self-immolates. Enormous banners with grainy images of the deceased monks faces hang from the temple gates, sat on a backdrop of photo-shopped flames.

The warning signs are rising from Tibet. China needs to address the issue, and the international community need to wake up to the fact that Tibetans in Tibet are crying out for their culture, their identity, and their religious freedom. They are turning away from the advice of Chinese authorities, the Tibetan government in exile, and their own religious beliefs, to send an incredibly powerful and symbolic final message.