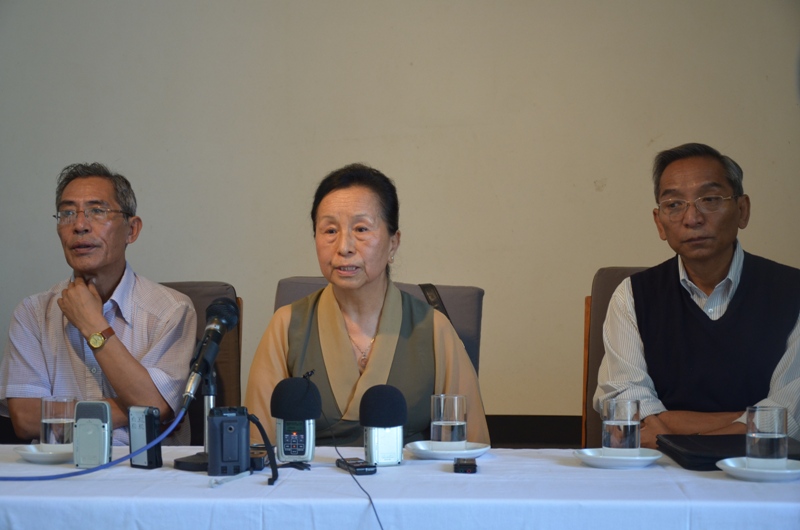 On July 18, 2001, a press conference was held in Dharamshala, India by the official of the Department of Information and International Relations (DIIR) to discuss the Central Tibet Administration’s (CTA) reaction to China’s recently released White Paper.

The White Paper, entitled Fifty Years of Democratic Reform in Tibet, defends China's position in regard to Tibet. The paper, according to China.org, claims that His Holiness the Dalai Lama and his allies' interests "fundamentally contradict those of Tibetan working people."

The paper states that His Holiness and his followers aim for Tibetan Independence, and calls for them to change their political position.

The paper also claims that many advances have been made in Tibet under Chinese rule, claiming that both political participation and the economy have grown rapidly. It also asserts that the Chinese government is making many efforts to promote Tibetan language, culture, and religion.

In response to China's latest white paper on Tibet, the Department of Information and International Relations of the Central Tibetan Administration said in their statement that "the ultimate judge of China's rule or misrule in Tibet should be the Tibetan people...the grim situation in Karze and Ngaba in eastern and northeastern Tibet is a clear judgment made by the Tibetan people of China's sixty years of rule in Tibet."

The statement accuses the Chinese government of covering up dark facts related to China's invasion of Tibet, such as the fact that over 1.2 million Tibetans have died as a result of the invasion. The White Paper, according to the CTA, is "another whitewash of an ongoing and ugly reality."

"Another startling fact of the nature of China's white papers on Tibet is their frequency. In an open, plural society, no elected government is compelled to issue white papers so frequently. An educated electorate and free media enable people to make their judgment on the performance of their elected representatives during elections. This is not so with China. In the age of the Internet, the Chinese Communist authorities spend enormous resources to keep the Chinese people ignorant and the media muzzled," it said.

The frequency of the white papers issued in China also indicates that the government is covering up the truth, according to the CTA. "No amount of cycled and recycled white papers can silence those brave Chinese voices that demand democracy in China and Tibetan voices that call for greater freedoms for the Tibetan people," the statement asserts.

"Perhaps one reason for China to waste so much ink and paper on the Tibetans is to counter the enormous and growing sympathy the Tibetan struggle attracts within the international community, including amongst Chinese scholars, writers, public intellectuals and human rights activists in and outside China. The international community, as such, will not be fooled by China's white papers on Tibet," said the statement.

The CTA plans to issue another statement directly countering the claims about Tibet's history and progress that are made in the White Paper.

In closing, the statement asserts that "the Central Tibetan Administration take this opportunity to inform Beijing that the day when the State Council feels that there is no need to issue white papers on Tibet is the day when the reality in Tibet conforms to official Chinese Communist rhetoric."